A new industry brief released by TAG last week highlighted the aggressive steps being taken by TAG members in the fight against malware.

Commenting on the findings, TAG COO Rachel Nyswander Thomas said, “One of the goals of this research was to understand how leaders in the space translate the ‘reasonable’ requirement into the percentage of assets upon which initial scans are run, as well as the frequency of rescans they run on all assets. These findings give TAG – and the industry as a whole – a strong sense of current best practices, an important starting point to consider better and stronger requirements for the certification as it continues to evolve.”

TAG worked with MediaPost on an exclusive story to share the findings.

During the DMEXCO conference in Cologne, Germany earlier this month, TAG and The 614 Group released a new report showing the effectiveness of using TAG Certified Channels to fight ad fraud in the German market. According to the data, digital advertising fraud rates in Germany were less than one percent when advertisers bought through companies that had achieved the TAG Certified Against Fraud Seal.

Drawn from more than four billion ad impressions in the first half of 2019, the report builds on previously released research by The 614 Group which has found that TAG’s certification standards have proven effective in reducing ad fraud in Europe and the United States.

The new report found that the Invalid Traffic (IVT)* rate on media within TAG Certified Channels in Germany averaged just .66 percent across all desktop, mobile, and video. By comparison, the benchmark IVT rate for German advertising released by Oracle Data Cloud’s Moat Analytics was 2.37 percent, a significant reduction of 72 percent.

The full report can be found here. 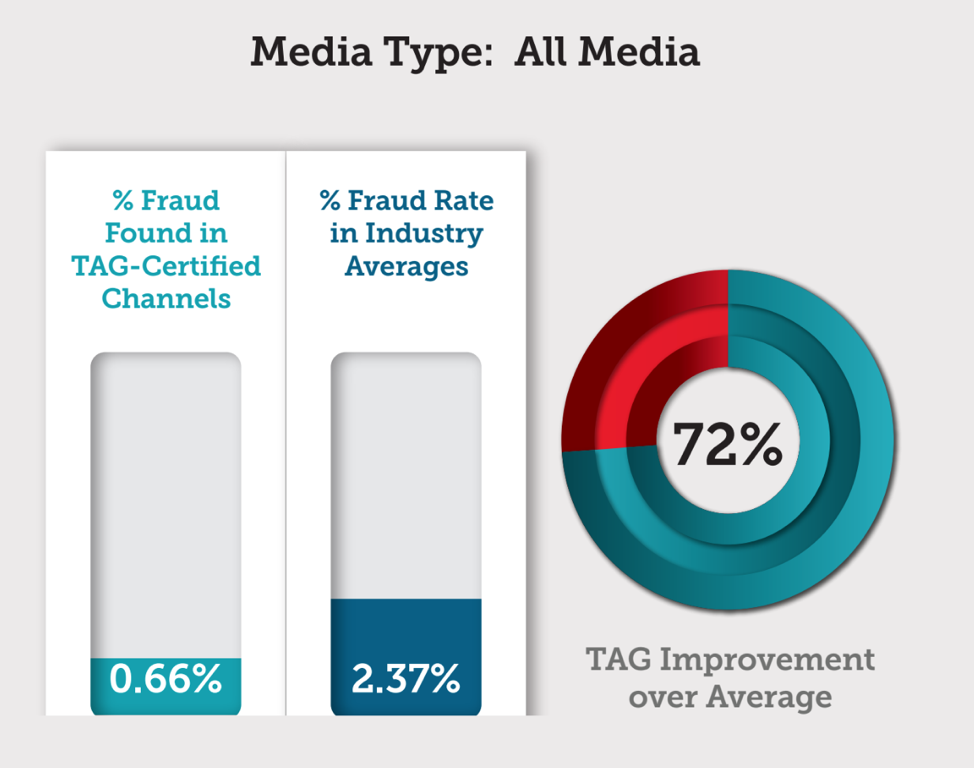 We are delighted to announce the incoming Co-Chairs for the four working groups that collaborate with TAG to develop and implement best practices, certification standards, and enforcement mechanisms for all of TAG’s certification and transparency programs. Each working group also outlined some of the areas for its priority work for the remainder of the year

Chris Hallenbeck of OpenX and Matthew Nguyen of The Trade Desk have taken the reins as Co-Chairs of TAG’s Anti-Malware Working Group. That working group will focus on:

David Green of NBC Universal will be joined by Joe Barone of GroupM as Co-Chairs of the Anti-Piracy Working Group. That working group’s priorities include:

Three industry leaders have agreed to serve as Co-Chairs of the Business Transparency Committee: Megan Frisbie of Annalect/OMD, Vinod Panicker of Amazon Advertising, and Alexander Groysman of Charter Communications. That working group plans to focus on:

Finally, Scott Spencer of Google and John Alleva of NBC Universal will continue to serve as Co-Chairs of TAG’s Anti-Fraud Working Group. The 2020 priorities for the working group include:

Please join me in welcoming all of the new and continuing Co-Chairs to these vital leadership roles!

Meet Us on the Road! TAG’s Fall Event Schedule

TAG executives have kicked off a packed speaking and event schedule that includes many of the largest industry gatherings this fall. Please let us know if you plan to attend any of the upcoming events. We’d love to see you and talk about ways to advance TAG’s efforts together!

From an interview with Rob Leathern, Director of Product Management at Facebook, in PYMNTS.com:

Collaboration with advertising platforms is another vital part of Facebook’s ad fraud prevention strategy. The company is part of the leadership council of the Trustworthy Accountability Group (TAG), a cross-industry initiative geared toward eliminating fraudulent ad traffic. Its members include Amazon, Disney and Google.

“Many of these bad actors are targeting a variety of different players in the ecosystem,” Leathern said. “The different companies [that] are exposed to these risks have to be talking to one another, either through an industry body like TAG or even directly.”