At the start of last year, we noted that the watchword for 2018 would be “global,” as TAG expanded its worldwide presence and accelerated its global growth. Twelve months later, we can look back with pride at a compendium of proof points on that effort.Among the highlights of TAG’s 2018 global expansion:

TAG’s overall growth also continues to power ahead with remarkable momentum. Over the course of the year, the number of companies approved for the TAG Registry, our proprietary screening process to ensure companies are legitimate entities, has tripled from 136 to more than 400, while the number of companies that have applied has jumped from 473 to 851.TAG’s Certified Against Fraud program has seen similar growth over the year, as the number of seal recipients has more than doubled from 50 to more than 115, and the pipeline of future participants remains full, with a total 232 companies having applied to receive the seal.But numbers alone don’t tell the tale. Over the course of 2018, TAG solidified its role as the global leader in tackling some of the toughest structural issues facing digital advertising, from fraud to malware, piracy, and brand safety. Among the highlights of that expanding role:

Too often, motion does not equal progress, which is why TAG was pleased that an updated 2018 analysis by The 614 Group in November found that TAG’s anti-fraud efforts were having a dramatic – and sustainable – impact in reducing fraud through TAG Certified distribution channels.

The analysis compared more than 75 billion ad impressions in 2018 from five of the largest ad agency holding companies, and it found that invalid traffic (IVT) rates were held to less than two percent in TAG Certified channels for the second year in a row. The 614 Group expanded its analysis from 2017 to include Sophisticated Invalid Traffic (SIVT) and a broader range of inventory types, including billions of video, mobile web, and in-app ads.

Further validating the industry’s approach, a December white paper from TAG and BSI found that investment in brand safety initiatives resulted in a positive ROI for some marketers who tracked that cost. The paper was also the first to quantify brand safety investment, finding that large agency holding companies are currently spending between $3-7 million annually on fixed-cost brand safety expenses.

By any standard, 2018 was a year of tremendous improvement, interconnection, and collaboration for our industry in addressing the challenges of digital advertising, and TAG is delighted that the success of our efforts can be seen in measurable trends of increased consumer confidence, less waste, better ROI, and reduced criminal activity. With your support, we look forward to continuing that growth and success in the year ahead. 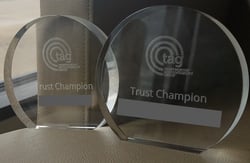 Every year, TAG recognizes the industry leaders who have made exceptional contributions to the industry’s efforts to advance brand safety with our organization’s highest honor as TAG Trust Champions.

This year, those recognitions go to individuals leading TAG efforts at two companies that have been instrumental in TAG’s growth and accomplishments across the spectrum of our activities, from fighting fraud to blocking malware, ending piracy, improving transparency, and raising our industry’s collective standards.

It is our privilege to announce the 2019 TAG Trust Champions:

Louisa Wong, David Murnick, and Olga O’Donnell of Dentsu Aegis
The collective leadership of the Dentsu team on the TAG Leadership Council has been a powerful driver of TAG’s success over the last year, while the team’s strategic guidance about how Team TAG can better serve the entire TAG Community has helped to elevate TAG’s work to new heights.

Dallas Lawrence, Christopher Hallenbeck, and John Murphy of OpenX
OpenX has always had a commitment to increasing trust and transparency throughout the digital advertising supply chain, but in 2018 they doubled down on these efforts across a range of TAG programs. Christopher Hallenbeck oversaw a complete revision of the TAG Inventory Guidelines Program as Chair of the Inventory Quality Working Group, while Dallas Lawrence and John Murphy organized a major effort to increase transparency in the programmatic marketplace. The Principles for a Better Programmatic Marketplace introduced new disclosure requirements across all of TAG’s certifications, which will engender trust and confidence for marketers around programmatic buying.

Please join me in thanking our TAG Trust Champions for their extraordinary efforts on behalf of TAG and our programs!